Have you ever wanted to give a Mythical Pokemon a squeeze? With the Pokemon TCG: Mythical Squishy Premium Collection, that dream can become a reality! This set, which is exclusive to Target stores, includes Mew, Celebi and Victini as lovable, cuddly, squishy toys. These soft foam figures can take a loving embrace and then return to their original shape. They’ll make great companions during your next Pokemon TCG match or whenever you need to give a cute Pokemon a little squish.

And yes, these three Mythical Pokemon are also here as incredible Pokemon V. Mew V’s X Ball attack grows in power depending on how much Energy both players have attached to their Active Pokemon. Celebi V can use its Find a Friend attack to bring two Pokemon out of your deck and into your hand, and its Line Force attack grows stronger for each Pokemon on your Bench. Victini V can warm up your team with its Spreading Flames attack, which lets you attach up to three Fire Energy cards from your discard pile to any to your Pokemon, and its Energy Burst attack functions just like Mew V’s X Ball. All three of these Pokemon V will make great additions to your Pokemon TCG collection.

Not only that, but this set also includes eight Pokemon TCG booster packs to enhance your deck. Expand your collection and make all your squishes come true with the Mythical Squishy Premium Collection. 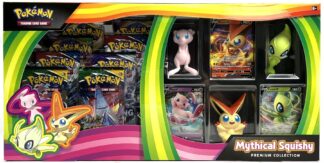